What is Building Biology?

Bringing together technology and design methods to provide the information needed to create healthy homes and workplaces.

Using nature as a standard provides the foundation for analyzing biological, chemical and electromagnetic exposures in your home or office. Despite their clear benefits, advancements in science and technology have produced emerging threats to our health and quality of life. It is now more important to look at our inside environments more critically than previously. The following foundations establish the basis for understanding how to create a healthy environment.

The precautionary principle is an approach to risk management that states if an action or policy has a suspected risk to the public or to the environment, in the absence of scientific consensus the action will cause harm, the burden falls on those taking action. Risk assessment measures the value of risk related to a situation. In the US this translates to determining the maximum exposure limit before a symptom is noticed. Reducing known exposures to the lowest possible level is the focus. 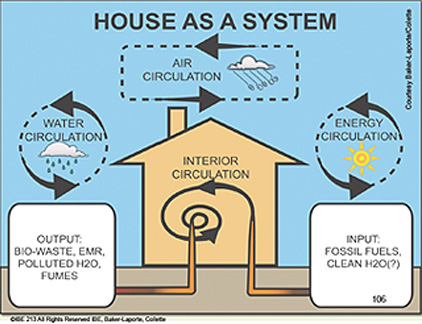 Before modern building, houses or shelters were built from natural materials and with natural processes. These shelters did not hinder the natural cycles described above, but rather were part of them. With new technology, the increased desire for comfort has changed this. Technology went in the direction of synthetic and other troublesome building materials. These products caused problems for humans, both because the houses were made so tight good air circulation could not be achieved and many of the products released harmful chemicals (called out-gassing, or off-gassing). In addition, moisture was often trapped in the tight houses, fostering the growth of molds, mildews, and bacteria. Unhealthy interactions of air, water, matter, and energy have caused our houses have become unbalanced.

Air: Humans and animals remove oxygen from the air by breathing. Plants use the carbon dioxide they give off to make more oxygen.

Water: Through the cycle of evaporation, cloud formation, rain, and then a return to groundwater or some body of water, water itself is purified and energized.

Energy: The sun’s energy is stored by nature in wood, in plants, in oil and natural gas or converted directly into another energy form. When burned, the energy is released. Some forms of energy are renewable, such as wood and solar energy, and some are being used up, such as oil and natural gas.

Foundation principles, risk assessment and the breathing home comprise the Building Biology® ideology. With a focus toward optimal indoor conditions, many houses and buildings in the US are not built on these premises. Building failures are more easily identified when approached from an ecolocial perspective. The comprehensive ideology allows for adaptive problem identification and solution provision as modern building continues to change.

The term “Bau‐Biologie” was coined by Dr Hubert Palm, a medical doctor, in Germany in 1960’s. He was one of the first to observe the declining health of the population as a direct result of living in housing built post WWII using the new “chemically enhanced” technologies. The enormous contribution of Professor Anton Schneider who, 45 years ago, was one of the German founders of the Bau-Biologie movement. He developed the “Twenty-five Principles of Bau-Biologie”, created the original Bau-Biologie Correspondence Course, in German, and permitted its translation into English.

While the phrase “Bau-Biologie and Ecology” is relatively new, the science is not. There have been many pioneers in the United States, Canada, Germany, and throughout the world who have studied and written about various aspects of building technology and effects on human health. A few of these forerunners, human ecologist Theron G. Randolph, M.D., Wilhem Reich, architect Richard Crowther, and writer Ken Kern (author of The Owner-Built Home), were driving forces in the United States. Hubert Palm, M.D., wood technologist Anton Schneider, Ph.D., and electrobiologist Alfred Hornig helped to establish the Bau-biological movement in Germany. The work of Nikola Tesla, electrical engineer/inventor, was also of significance to the movement.

Helmut Ziehe translated the Building Biology curriculum to English for North America. His calling began with an “aha” experience in North Africa in 1980 that changed the course of his life and career. As resident engineer for a city of 90,000 inhabitants, he noted that a majority of people had abandoned their government provided homes in favor of living in tents. Their government homes were constructed of concrete, a poor material health-wise, that heated the interior rooms to an extent that air conditioning could not bring adequate relief. As a seasoned architect, with a Dipl. Ing. degree from the Technical University of Berlin, and a Master’s in Tropical Studies from the London School of Architecture, Helmut unearthed the solution by examining historical local homes, some of which dated back 4,000 years, and found they used clay as their basic building material and utilized covered walkways for shading and ventilation. This eye opening experience led Helmut beyond his career as a modernist architect to embrace the precepts of Bau-Biologie.

He began his studies under Dr. Anton Schneider at the Institut für Baubiologie + Oekologei (IBN), and never returned to his “conventional” architecture practice. Once his engineering assignment in North Africa was completed, Helmut moved to the United Kingdom, where he established the English Institute of Bau-Biologie, personally translating from German into English the twenty-three IBN course packs that became the IBE Correspondence Course for training new Building Biologists. He relocated to the United States in 1987, founding The International Institute for Bau-Biologie & Ecology (IBE), which serves all of North America, as well as other English speaking and Latin American countries.

The term Building Biology is seldom heard in the sustainable/green building industry. Some of the principles are present, but not the cohesive picture which needs to be explained.

Building Science is the study of how and why building failures occur. The house is considered a system where Green Building is an extension of Building Science whose goal is to reduce the energy used to power up a home. Energy efficiency is one of the only ecological considerations Often tightening the building envelope using energy efficient mechanical systems with higher R-value insulation is the most common solution.

Building Biology encourages the “Breathing Home” concept where the building envelope is not as tight allowing for the passage of moisture using thermal mass. Passive controls like radiant heat allow for energy efficiency in addition to solar orientation. Less chemicals, proactive moisture controls and low electromagnetic exposure principles provide a foundation for a Healthy Home or Workspace.

House as an Organism

Balance of Mass and Insulation

House as a system

Follows the Building Science guidelines considering a house as a system.

The main tenet of green building is to decrease the energy used.